Time Out says – ‘The Potting Shed’ 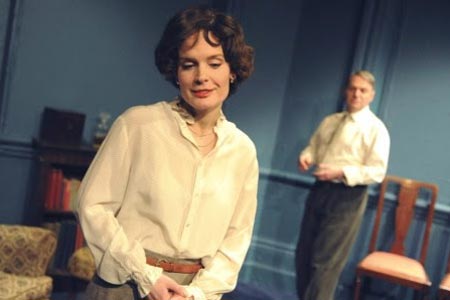 The last time Graham Greene’s 1957 play ‘The Potting Shed’ was performed in London, in 1971, the cast included that Peter Pan of pop, Cliff Richard. Both star and play have fallen from fashion and in both instances Christianity seems to have something to do with it. Cliff’s cuddly evangelism turned off younger audiences. And in the case of ‘The Potting Shed’, its ruminations on faith now seem poorly served by a potboiler plot.
In some ways the subject is startlingly contemporary: as the play begins, the Callifer family gathers for the funeral of patriarch Henry, a bestselling atheist author. The Callifers have been riven by conflicts over religion, but son James is baffled: he doesn’t know how he’s fallen out of favour with the rest of the tribe, or why he has no memories prior to his fourteenth birthday.
Greene’s script crackles with mordant wit, and Svetlana Dimcovic’s revival is propulsive, engrossing and boldly characterised. Yet it’s weighed down by some clunky plot devices (in five years of marriage, James’s ex-wife never caught wind of his memory loss) and the final faith-based revelation about James’s missing years feels – in this less devout age – glib and underexplored.