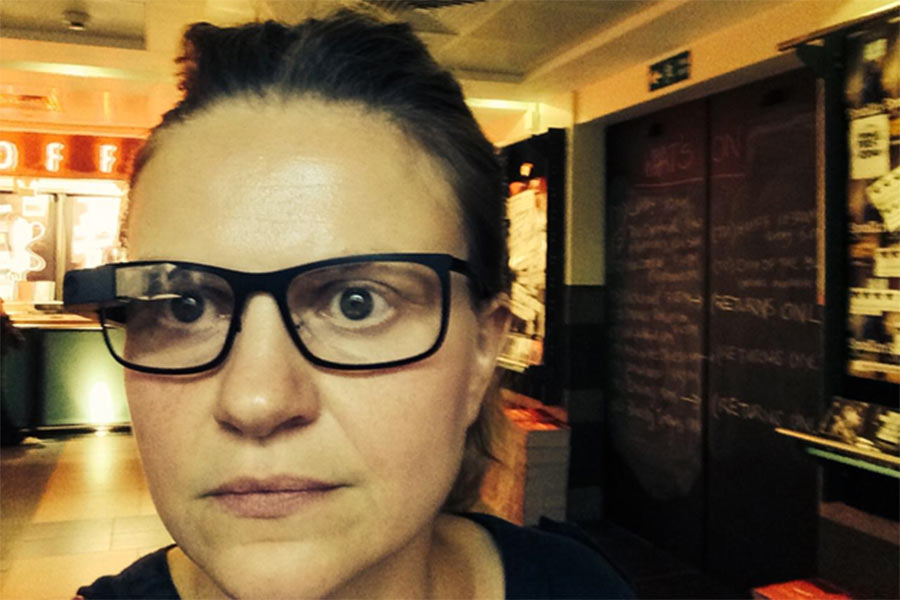 Winner of a Fringe First 2014 award, this is a brilliant two hander about Scottish independence and a Minister’s wish to speak off message but more truthfully to the people of a newly independent Scotland.

I enter the Traverse, as always, making directly for the bar to order an espresso. Only a handful of people actually look at me as if anything unusual is going on. One or two younger audience members seem to recognise the wearable technology on my head but in the main, people neither notice nor care. They are here for excellent performances and meetings and the busy Festival schedule means this is irrelevant.

I wonder if the reaction would be the same on press night.

The cast have been warned and front of house arrangements made and I take my seat in Traverse 2, an intimate studio space with seating enveloping the stage. My main concern is disturbing other members of the audience and as a director, respecting the work of my colleagues, I take an extra precautionary measure and use the Google Glass earphones. This means that any user error during the performance can’t lead to spoken information from my headset.

Therefore the device is totally silent and all my other technology is switched off apart from my iPhone which is on silent so it can still ‘see’ Google Glass as it operates.

I take my seat and record a short video of the empty stage.

All our professional fears are dismissed at once as I realise that Google Glass can’t film effectively from anywhere in the auditorium except perhaps the front row, due to lighting over-exposure: this device was, after all, made for daily snapshots of life and not for professional filming. It transpires very quickly and live during the show, that although I could record and share the video instantly with people online, in fact this is impossible due to poor mobile reception in most theatres, poor wi-fi connection and above all, the poor quality of the recorded image.

Anyone watching would simply switch off and decide to buy a ticket.

The sound however does work and as I review footage after the show, it is clear and crisp, unlike sound in the recordings from the noisier and acoustically less satisfactory bar.

I continue to watch the show and occasionally feel that Google Glass is enhancing what I am seeing, as I can take a photo or a short reference video of the work and this cuts out copious note making. The device is excellent for working with, quickly allowing references to be recorded and saved. You can also immediately view what you have recorded though I am too busy watching the mesmerising Gabriel Quigley and Richard Clements as they battle the Scottish political field of speech making post-Referendum.

This is a quick, witty piece of new writing which is directed very theatrically, with surprises and twists during the performance which take the audience on this funny journey.

As such, it is a piece of theatre best enjoyed from the auditorium.

I also manage to take a few good photos during the show, some capturing the pin drop silence and some the uproarious laughter of the audience experiencing Spoiling. 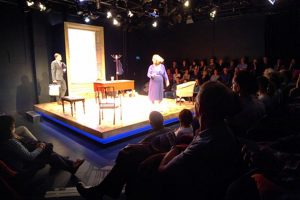 Running at just under an hour, the show zips along and we wonder if Scotland will be independent and what that might mean.

Audience members sharing impressions with their friends and family in the interval and after the show?

Designers sharing ideas instantly with the rest of the creative team, from different sourcing locations?

The possibilities are endless.

Comments and suggestions are welcome as this project grows. Please email Merchant Culture at merchantculture@icloud.com

Svetlana Dimcovic is the Director and Founder of Merchant Culture www.merchantculture.com

F-cked.com. A Tale of Bubbles and Crashes
The Potting Shed, Finborough Theatre, London